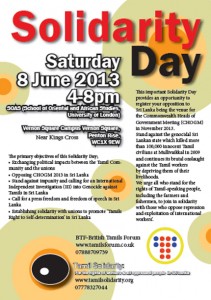 British Tamils Forum (BTF) and Tamil Solidarity (TSol) are jointly organising a solidarity day, to be held on Saturday 8 June 2013, from 4pm, at SOAS, London. The event is aimed at fostering closer ties between the Tamil Community and unions in the UK.

The British Tamil Community is a vibrant, hard-working and politically active community group. It is estimated that over 300,000 Tamils live in the UK, most of them residing in London.

With a large proportion of these Tamils working in the public and service sectors, there is tremendous potential for unions to engage with this community.

Many British Tamils, with their roots in the traditional Tamil homelands â€“ Tamil Eelam â€“ in the North and East of the island of Sri Lanka, arrived in the UK to escape the decades-long persecution they faced there. British Tamils continue to maintain a strong interest in current events in Sri Lanka, where their relatives are still treated as second class citizens and denied their fundamental rights.

Tamils have faced employment discrimination, harassment, individual violence and state-sponsored pogroms since the independence of Sri Lanka â€“ and they have long maintained that the oppression they face constitutes genocide. However, their claims were largely ignored by the international community until the persecution reached its bloody climax in 2009, when over 100,000 Tamils were killed by Sri Lankan security forces, and countless more uprooted and injured. Even since 2009, the Tamils continue to face oppression in many forms â€“ including government seizures of Tamil-owned land; sexual and physical violence by military personnel; overwhelming militarisation of Tamil homelands; farmers losing their land to Sinhalese colonisers; and further political disenfranchisement.

Although the international community has become more vocally critical of the Sri Lankan state since the events of 2009, it has failed to carry through with any actions that meaningfully help the Tamil people. Moreover, it has even taken steps that increase the power and legitimacy of the Sri Lankan state: a highly topical case in point is the Commonwealth’s decision to hold its next Heads of Government Meeting in Sri Lanka in November 2013 â€“ despite condemnation from several international human rights groups. British Tamils were further saddened to hear that the UK government plans to participate in this summit.

British Tamils, who play a significant role in the cultural and economic life of this country, hope to take their story and struggle to every corner of British society. British unions, which represent a large part of this society, have a long and honourable history of expressing solidarity with oppressed people around the world. This Solidarity Day provides an opportunity for British workers to stand shoulder to shoulder with their oppressed Tamil brethren â€“ and in particular register their opposition to Sri Lanka hosting the Commonwealth Heads of Government Meeting (CHOGM) in November 2013.

The primary objectives of this solidarity day are as follows:

We call on all Tamils in the UK to join us and support this networking event for establishing closer relationships with union members and solidarity organisations.

working together for peace with justice and dignity.