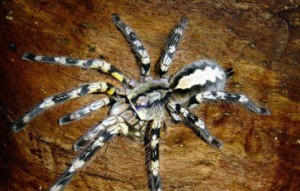 While conducting a survey on Theraphosidae Spider fauna, a group of Sri Lankan scientists made a special discoveryâ€“ a discovery of a new species of tiger spider in Northern Sri Lanka.

The tiger spider (Poecilotheria rajaei) belongs to the genus poecilotheria and is endemic to Sri Lanka.

The species was discovered by principal investigator and scientist, Ranil Nanayakkara and his team which includes Peter Kirk, Salindra Dayananda, G.A.S.M.Ganehiarachchi, Nilantha Vishvanath and T.G.Tharaka Kusuminda in 2009.

â€œThe first specimen of this new species, which was brought to the attention of the researchers, was a dead specimen of a male spider. The spider had been killed by the villagers. Upon close inspection, it was noticed that it did not conform to the descriptions of any of the species of Poecilotheria so far discovered from the island, as it differed in possession of a ventral abdominal band, among other significant differences,â€ Nanayakkara said.

According to him, the only other species of Poecilotheria which possesses such a band is the Poecilotheria regalis, found in mainland India. â€œThe researchers carried out intensive and extensive surveys in Northern Sri Lanka to establish the distribution and ecology of this new species, but what went lacking was a female or any other specimen of the same species.

â€œDays of extensive searching in every tree hole and bark peel were rewarded with a female and to researchersâ€™ also discovered several juveniles too. â€œWith the help from Sub Inspector of Police, Michael Rajakumar Purajah, we were able to secure and study more specimen of the same type in their natural habitat. Research in the Northern Province also became possible due to the end of the 27- year- long war that had affected the area,â€ Nanayakkara said.

All specimens of the new species were gathered from Mankulam in the Northern Province and deposited in the National Museum of Sri Lanka and the Wildlife Training Centre Museum in Giritale.