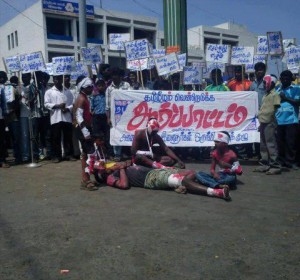 With the protests against alleged human rights violation by the Sri Lankan government entering the 25th day today (Monday), student leaders in Chennai say their agitation will intensify in the coming days, the Times of India reported

Student leader V Prabhakaran said they would meet today to decide on future course of action. â€œStudent representatives from all the 32 districts will attend the meeting. We will be looking at the review of the UNHRC resolution that will come up within four monthsâ€™ time. We will plan programmes to put pressure on the Central government to take a tough stand against Sri Lanka,â€ said Prabhakaran.

Leaders say the students movement is now aimed at eliciting a much stronger political stand from the Centre, including economic sanctions against Sri Lanka. Prabhakaran said the students would demand that the Centre snap diplomatic ties with the island nation and shut down Sri Lankan embassies and other official institutions in India.

Last week, Tamil Nadu chief minister J Jayalalithaa, after declaring solidarity with the cause of the students, appealed to them to call off protests and concentrate on their studies. The meeting of students â€˜ leaders from all the districts is going to be a crucial one for the state government as it is already in a dilemma over finalising the date to reopen colleges. The meeting is expected to have more than 100 senior organizers from across the state and leading colleges in the city.

Academics say the indefinite closure will affect students of regular colleges, in view of long procedures involved in identifying and inspecting hundreds of examination centres, centralised valuation system and announcement of results.

V Suresh, national general secretary of Peopleâ€™s Union for Civil Liberties, said the decision to shut down all colleges was unwarranted and it has helped only to create an artificial scare among students. â€œRemarkably protests across the state have been peaceful so far. The government should take the students into confidence and reopen the colleges immediately,â€ he said.