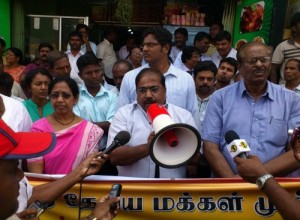 The Tamil National Alliance (TNA) , yesterday called for a meaningful process of reconciliation based on ensuring truth, justice and reparations for victims of violent crimes committed by all parties.

A TNA statement said that recent attacks on the democratic expression of Tamils in the North and East are clearly carried out with the active support, sanction and collusion of the Sri Lankan government

â€œWe call on all right-thinking citizens of this country and members of the international community to prevail on the Sri Lankan government to immediately cease the violence directed against the Tamil People,â€ the TNA said.

It also condemned the numerous episodes of mob violence against the Muslim community and Christian places of worship, and demanded that action be taken against the purveyors of violent hate.

â€œWe reiterate that to prevent a non-recurrence of the past, Sri Lanka must embark on a meaningful process of reconciliation based on ensuring truth, justice and reparations for victims of violent crimes committed by all parties,â€ the TNA said.

The TNA also expressed its grave concern over an attack today by armed assailants of the Kilinochchi distribution office of the Uthayan newspaper.

Of the four staff injured, one is in critical condition and three others hospitalized. Property has also been damaged. The attack took place when a vehicle carrying copies of the newspaper for distribution arrived at the Kilinochchi office.

The TNA statement recalled that last Saturday, a mob of over 50 persons attacked a public meeting held at the TNA office in Kilinochchi by throwing rocks from a short distance.

The attacks resulted in injuries to 13 people and extensive damage to property. These attacks were caught on video and the persons involved are easily identifiable.

â€œHowever, not one person has been arrested in relation to this violence, despite the presence of police on the scene while the attack took place. In fact, one assailant apprehended by those present at the meeting was identified to be an officer of the Crimes Investigation Department [CID] of the Sri Lankan Police. He was handed over to the Kilinochchi police but was released shortly thereafter,â€ the TNA said.