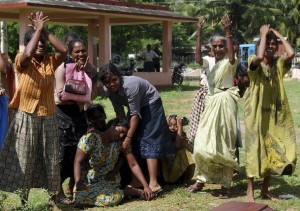 The Tamil National Alliance (TNA) has opposed the Army’s decision to relocate 14 camps in the Valikamam region in Jaffna to the Palaly Cantonment.

TNA Spokesperson, Parliamentarian Suresh Premachandran, said thousands of private land owners in the Palaly region are already ‘confined to the streets,’ due to the heavy military presence in the area.

“This is privately-owned land the Army is relocating their camps to. Some 40,000 people have been confined to the streets in the area, and about half of them are fishermen. The land is fertile as well. If they want to relocate, they should do so away from the North,” he said.

He also said the Army should not become involved in any development projects in the North, and added that such matters should be the responsibility of civilian bodies.

Premachandran claimed, “Some 2,000 people have already presented themselves before the Court of Appeal to demand the restoration of their lands, and even more have signed a petition against ‘infringement of their fundamental rights.'”

Army Spokesperson, Brigadier Ruwan Wanigasooriya, when asked whether the decision to reduce the military presence in the North had been taken on short notice, said the Army does not arrive at decisions without deliberating on them first. “It was a matter of balancing requirements of the nation and the people of the area,” he said. Clarifying the matter further, he said, “Only the camps in the Valikamam region are being relocated to the Palaly Cantonment, but not entirely. The camps in the other two regions of the peninsula, Thenmarachchi and Vadamarachchi, are based on properly acquired government land.”

He confirmed that a number of camps in the Valikamam region were located on private land and said, “We will eventually leave three camps in the region, for security reasons, with the rest being relocated to the Cantonment. There are constructions that need to be done to accommodate the troops there, and these are being done as fast as possible.”

He also said one must not assume that only three military camps are present in the whole Jaffna Peninsula, referring to the ones present on government lands in Thenmarachchi and Vadamarachchi.