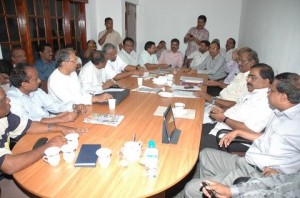 A conflict has occurred among the leaders of the TNA regarding the party symbol. The reason for the conflict is said to be the refusal of a proposal to have a common symbol for the TNA, which consist of five Tamil political parties, instead of the â€˜houseâ€™ symbol of Ilankai Arasu Kachchi that has been used as the symbol of TNA until now.

A delegation from the TNA is scheduled to make an official visit to India on the 10th but no representative from any other party has been named for the delegation say sources.

TNA representatives say the result of such moves would be parties taking measures to be independent and there would not be an alliance after that.