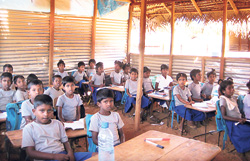 The Tamil National Alliance (TNA) is to go to court over the resettlement of war displaced Tamils in the north. TNA MP Appadurai Vinayagamoorthy said that his party will seek the intervention of the court to resettle hundreds of people on their original lands in parts of the north.

He also said that the TNA will support a demonstration set to be staged by families who are yet to be resettled on their original lands. According to the SL Ministry of Resettlement, as of last month 17,749 war displaced people are living with their relatives and family members in Jaffna.