The Chinese military has leaked first photos of a brand new lightweight fighter with external characteristics that allow the jet fifth-generation attribution. Some pictures suggest it could be used on future Chinese aircraft carriers. 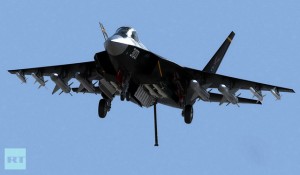 The aircraft bears a certain resemblance to Lockheed Martinâ€™s F-35Â  Lightning II, and even reportedly has the codename F-60. ThoughÂ  absolutely no characteristics of the prototype have been unveiled, oneÂ  major difference is obvious: unlike its American relative, Chinaâ€™s F-60Â  has two engines.

The pictures of the Chinese technology demonstrator suggest that theÂ  engines the aircraft is currently equipped with do not have thrustÂ  vectoring nozzles which might suggest the prototype is at too early aÂ  stage of testing to get more sophisticated and powerful propulsionÂ  package.

A blurred photo from China Military Report website is the only proof that SACâ€™s F 60 aircraft has successfully been airborne.

Now it has become obvious that in the race for possession of fifthÂ Â  generation aircraft the Chinese military placed its bets on two horses:Â Â  Chengdu Aircraft Corporation, which is heavily testing its J-20 â€œMightyÂ Â  Dragonâ€ fifth generation heavy fighter-bomber, and Shenyang AircraftÂ Â  Industry Group with its F-60 lightweight fighter.

Yet, the F-60 andÂ  J-20 are not likely to be regarded as competitorsÂ  because it appearsÂ  the aircraft will have different specializations.Â­

Â­Chinaâ€™s first aircraft carrier, dubbed Shi Lang, laid down by the SovietÂ Â  Union in the late 1980s and almost finished now by Chinese engineers,Â Â  is expected to be put into service by the end of 2012. Still, BeijingÂ Â  has informed the warship will be not ready for action till 2017.

The Peopleâ€™s Liberation Army Air Force (PLAAF) already has fighterÂ  jets to form the aircraft wing for Shi Lang. China produces J-15, aÂ  copycat of the Soviet-made Su-33. The J-15 copycat has been made byÂ  Shenyang Aircraft Industry Group. But the Su-33 was designed in theÂ  1980s and cannot be regarded a proper sea-based aircraft in the 2010s.Â  Probably since SAC already proved it can make a sea-based aircraft,Â  Beijing commissioned a great challenge of creating a fifth generationÂ  fighter jet for naval use to this corporation.

Chinese Military Review website has published computer-generatedÂ  images of the F-60 fifth generation fighter jet in action with a wholeÂ  range of various air to air missiles. On at least two pictures theÂ  aircraft is depicted with an extended arrest hook that the sea-basedÂ  aircraft use to stop after landing on the deck of an aircraft carrier.

The two-wheeled front rack chassis of the real F-60 prototype alsoÂ  suggests the aircraft is being engineered for naval use, like sea-basedÂ  versions of Dassaultâ€™s Rafale in France, Lockheed Martinâ€™s F/A-18 E/FÂ  Super Hornet and the Soviet-made Su-33. At the same time there are noÂ  signs the prototype is capable of short take off and vertical landing,Â  which the F-35B STOVL version has.

A brief look at theÂ  computer-generated images also exposes another feature the F-60 has inÂ  common with Lockheed Martinâ€™s F-35 Lightning II: an extremely limitedÂ  space in the internal weapon bays. A stealth aircraft must have all ofÂ  its weapons hidden inside the hull to decrease the aircraftâ€™s visibilityÂ  to enemy radars. The Chinese F-60, just like the American F-35, canÂ  only carry small-sized short range missiles in true stealth mode.

ToÂ  get seriously armed the F-60 would have to carry long-range missilesÂ  externally, which would nullify its stealth capabilities. If so, theÂ  F-60 will have limited capabilities.

Probably the biggest problemÂ  of the modern Chinese aviation industry is the deadlock with militaryÂ  jet engines it currently finds itself in. For bothÂ  Chengduâ€™s J-20 and Shenyangâ€™s F-60 there are no reliable Chinese-madeÂ  jet engines with technical characteristics appropriate for a fifthÂ  generation fighter. Still, Chinese engineers are known not only forÂ  copycat efforts, but for outstanding persistence in achieving theirÂ  objectives.

It cannot be altogether excluded that by 2017, whenÂ  the Shi Lang aircraft carrier will be commissioned and more warships ofÂ  the kind be under construction, Chinese engineers will probably decreaseÂ  or eliminate the dependence on Russian jet engines and spare parts andÂ  put the F-60 on a proper flight. (RT News)