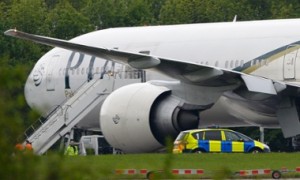 Two men have been arrested after a Pakistan International Airlines (PIA) plane with more than 300 people on board was at the centre of a security alert and was escorted to Stansted airport by RAF fighter jets.

Officers from Essex police boarded flight PK709 and took two British men, aged 30 and 41, to a station for questioning on suspicion of endangering an aircraft.

The incident was not believed to be terrorist related. Essex police said they were treating the incident as “a criminal offence”.

Police said the plane was the subject of “forensic examination by specialist officers … at this point in time no suspicious items have been recovered.”

Passengers on the flight said cabin crew had told them that the men had tried to enter the cockpit a number of times and an argument had ensued. 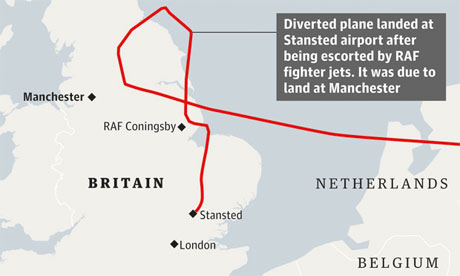 Route of the plane diverted from Manchester to Stansted. Source: Guardian Graphics

It is understood that after the pilot was informed of disruptive behaviour a request was made to divert from its destination of Manchester airport to Stansted, London’s third airport, as a precaution.

Typhoon jets from RAF Coningsby in Lincolnshire were launched.

There were unconfirmed reports that bomb threats were made. The New York Times quoted a spokesman for PIA, Mashhud Tajwar, as saying that shortly before the plane was due to land at Manchester the men threatened a flight attendant that “they will blow the plane up”. Tajwar later said the two passengers said they were joking but the security procedure had to be followed.

The Guardian has not verified the report of bomb threats.

Passenger Umari Nauman told Sky News: “The cabin crew informed us that basically they tried to come into the cockpit a few times and because they had been asked not to do that they got into a bit of an argument with the crew.”

Passengers were ordered to leave their possessions on board before leaving the plane, she said. They were being looked after by Stansted staff in an airport lounge early on Friday evening while the airline considered how to make sure passengers reached their destination.

The plane taxied to the north side of the airport, well away from the terminal, as flights carried on with minimal delays.

Mahmouda Aslam, 50, from Prestwich, Manchester, had been waiting for her husband, Mohammed, who was on the flight. She said after speaking to him on his mobile phone: “I said: ‘Are you alright? Are you scared?’ He said: ‘We are all OK. The flight is full of police.'”

Zohaib Sattar, 24, from Huddersfield, waiting for his wife, Iqra Anwar, 24, and his father, Abdul Sattar, 57, said he spoke to his father on the phone after landing. “My father said there was no warning or threat, all of a sudden the plane just turned around.”

A spokesman for Stansted airport said police may wish to interview passengers about the incident. “At some point police and the airline will arrange for their onward transportation to Manchester.” (The Guardian)