Britain may deploy its warplanes in the Gulf region amid the mounting tension over a possible war between Israel and Iran and the overall turbulence in the wake of the Arab Spring, according to a British newspaper.

Â­The arrival of Eurofighter Typhoon fighter jets may be announced soon by Prime Minister David Cameron, who has been discussing the issue with rulers of the United Arab Emirates, says The Independent.

The warplanes may be deployed at the Al Dhafra airbase south of the capital Abu Dhabi, where American and French troops are already present. Itâ€™s not yet clear which country would pay for the Typhoonsâ€™ presence. The UAE foots operational costs for the French Mirage fighter-bombers stationed there, which is estimated at between 20 and 45 million euro annually.

The news comes as top Israeli politicians are touring European countries. Defense Minister Ehud Barak is in Britain, where he met military top brass in addition to politicians. He is said to be aware and supportive of the plan to deploy British warplanes in the region. 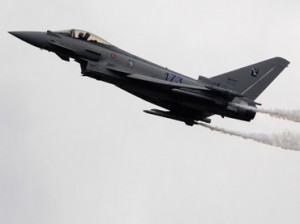 Barak earlier reiterated in an interview that Israel will attack Iranian nuclear facilities unilaterally when it feels it is necessary to prevent Tehran from creating a nuclear weapon. However, he said the deadline to launch such an attack will not come before spring or summer next year.

Israelâ€™s Western allies, including the UK and the US, have been trying to restrain its hawkish ambitions, citing the mounting economic sanctions against Iran. The damage to the Islamic Republicâ€™s economy appears significant ever since America and the European Union targeted its oil industry.

Tehran however remains defiant and defends its right to develop civilian nuclear program. It denies all allegations of secretly trying to weaponize its stockpile of enriched uranium.

UKâ€™s Ministry of Defence insists the possible deployment of Typhoons has no connection with the tension around Iranâ€™s nuclear program.

â€œWe have a mutual interest with our GCC [Gulf Cooperation Council] partners in ensuring peace and stability in the region, and exercises such as this allow us to practice working together,â€ it said.

However the warplanes may be needed to secure the strategic Strait of Hormuz, a major oil transportation waterway, which Iran threatened to block in case of an attack against it. The British government said it wanted to be prepared for any contingency, although it favors sanctions against Iran over a military intervention.

UK already has a significant military presence in the Persian Gulf, including a number of warships and a nuclear submarine. The key military player in the region, the US, also built up its forces in the region over the past year amid the tension.

In addition to maintaining three aircraft carriers on patrol, the US Navy doubled the number of mine sweepers assigned to the region, moved a converted amphibious transport and docking ship there. Its Air Force has deployed additional F-22 and F-15C warplanes capable of striking on Iranâ€™s territory. (RT News).