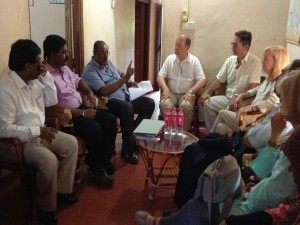 A visiting British parliamentary delegation has had talks with the Tamil National Alliance (TNA) on the current developments in the North as well as the political situation in the country.

The delegation, on a visit to Jaffna today, met a TNA delegation headed by TNA General Secretary Mavai Senathirajah.

During their one week visit to Sri Lanka which began yesterday the delegation is also scheduled to have talks with government and opposition members in the country as well as civil society members.

A meeting has also been scheduled with President Mahinda Rajapaksa but the meeting is yet to be confirmed.

Last week Britain had issued a virtual ultimatum to the Sri Lankan government saying if there is insufficient progress on Sri Lankaâ€™s own commitments on addressing human rights related Britain will look for a strong and unified response at the UN Human Rights Council (UNHRC) in Geneva.

â€œWe have been clear that we expect progress in both these areas and also access by media and civil society to the Commonwealth Heads of Government Meeting (CHOGM), as well as free, fair and peaceful Northern Provincial Council elections in September,â€ he had said.