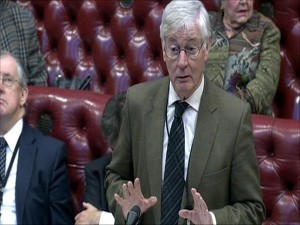 The British government will push for accountability in Sri Lanka as well as demilitarization of the north and a political settlement.

Lord Wallace of Saltaire says the Government of Sri Lanka faces considerable challenges and Britain continues to raise questions about how well Sri Lanka is doing in post-conflict reconstruction and reconciliation.

He said the the most difficult area that has been raised is on the forthcoming Commonwealth Heads of Government Meeting (CHOGM) in Colombo.

â€œWe continue to consider our position on what sort of representation we will provide for the Commonwealth Heads of Government Meeting when it takes place,â€ he said.

Lord Wallace recalled that Foreign Office Minister Alistair Burt was in Sri Lanka recently where he visited the north of the country, in Tamil majority areas, to see what was happening on the ground.

â€œSome progress has been made, for example on economic development, demining and the rehabilitation of child soldiers,â€ Lord Wallace said.

He however said the impeachment of the Chief Justice was â€œdistressingâ€ as it affects the rule of law within the country.

Meanwhile, separately, Parliamentary Under-Secretary of State at the Home Office, Lord Taylor of Holbeach, says the UK Border Agency has reviewed allegations made by Sri Lankan nationals that they faced mistreatment following their removal from the UK and provided a response in a country policy bulletin, published in October 2012.

He noted that it was concluded that the evidence did not justify a change in the agencyâ€™s policy on returns to Sri Lanka.

â€œWe constantly review the situation in Sri Lanka and decision makers have access to up-to-date country information from the agencyâ€™s country of origin information service. This information ensures that claims for protection are considered fully in light of objective information. Where we find individuals are in need of our protection, for example if they are at real risk of being tortured or ill treated on return, we will give it,â€ he said.