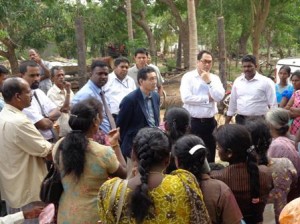 A visiting UN delegation visited the final battle zone in Mullivaikal, where Sri Lankan forces massacred more than 140,000 Tamil civilians yesterday and had discussions with families resettled in the area. Senior Political Affairs Officer in the Department of Political affairs at the UN, Hitoki Den, who is in Sri Lanka, discussed the concerns of the people in the area. Earlier this week the UN official had also met the Jaffna Bishop where it was reported that he had expressed regret over the UN failures during the final stages of the war. Families resettled in Mullivaikal had reportedly told the UN delegation that they were not given enough housing materials to resume their day to day living. The visiting UN delegation had told the people that they will look into their concerns.]]>