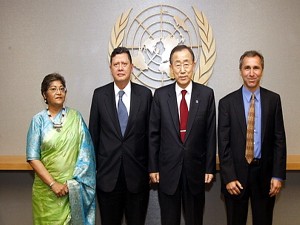 A UN human rights expert says sheâ€™s shocked the Sri Lanka will be allowed to host the Commonwealth Heads of Government Meeting (CHOGM) this year despite ongoing cases of torture and disappearances.

Yasmin Sooka, who was asked by UN chief Ban Ki-moon to investigate allegations of human rights abuses during Sri Lankaâ€™s war, says the country is still perpetrating abuses against its own civilians.

â€œPeople continue to be tortured and disappeared,â€ she told ABC radio on Monday.

â€œSri Lanka is quite frankly descending into a state where the rule of law no longer holds sway.â€

She praised Canada for saying it would boycott the November CHOGM meeting unless Sri Lanka investigates suspected war crimes.

â€œIn the absence of any action by the government of Sri Lanka, they should not be rewarded by being allowed to host CHOGM,â€ she said.

Sooka says sheâ€™s surprised other commonwealth countries, including Australia, are taking â€œsuch a weak lineâ€ in saying they will attend the meeting.

â€œI must say Iâ€™m surprised by Australia â€¦ itâ€™s quite shocking,â€ she said.

The federal government says it disagrees with Canadaâ€™s position and will not join a boycott of the event.

â€œSheâ€™s turning that blind eye because she thinks itâ€™s more important to send asylum seekers back to Sri Lanka than actually address the reason why theyâ€™re seeking asylum in the first place,â€ she told reporters in Melbourne.

Australia has returned more than 1000 failed asylum seekers back to Sri Lanka since August 2012.