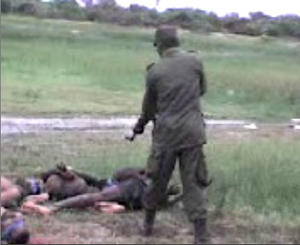 At its March 2013 session, the United Nations Human Rights Council should authorize an independent, international investigation into war crimes committed during the final months of Sri Lanka’s armed conflict, Human Rights Watch said in a letter to council members today.

Since the council adopted a resolution on Sri Lanka at its March 2012 session calling for action, the Sri Lankan government has taken no significant steps to provide justice for victims of abuse and accountability for those responsible.

â€œOver the past year the Sri Lankan government has alternated between threatening activists who seek justice and making small, cynical gestures to keep the international community at bay,â€ said Brad Adams, Asia director at Human Rights Watch. â€œThe Human Rights Council should dismiss these tactics, end the delays and authorize an independent, international investigation into the estimated 40,000 civilian deaths at the conflictâ€™s end.â€

On February 11, 2013, the UN Office of the High Commissioner for Human Rights issued a highly critical reporton the Sri Lankan governmentâ€™s failure to provide justice and accountability and urged â€œan independent and credible international investigation into alleged violations of international human rights and humanitarian law.â€

Human Rights Watch called on Human Rights Council members to support a resolution that would establish an international investigation under the high commissionerâ€™s office.

Several independent institutions, including the United Nations Panel of Experts in its April 2011 report,Human Rights Watch, the International Crisis Group, and others have reported numerous credible allegations of war crimes and other serious human rights abuses committed by government forces and the Liberation Tigers of Tamil Eelam (LTTE) during the armed conflict that ended in 2009. However, the government has taken no significant steps to undertake impartial and credible investigations of these alleged violations. The authorities have not reported any criminal prosecutions for serious rights abuses committed during the final years of the conflict. Indeed, thus far impunity for these abuses has been total. Most disturbingly, an army court of inquiry set up by the government to look into these allegations issued a report on February 15, fully exonerating the army from any liability for civilian casualties.

On top of the governmentâ€™s failings on justice and accountability, the human rights situation in Sri Lanka has deteriorated since the March 2012 Human Rights Council session, Human Rights Watch said. The administration of President Mahinda Rajapaksa has increased its control over the legislative and judicial branches of government and decreased democratic space. In late 2012, the government effectively eliminated the independence of the Supreme Court by orchestrating the impeachment of the chief justice after she ruled a government-sponsored bill to be unconstitutional. Rajapaksa quickly installed a political ally with a long record of rejecting accountability for conflict abuses as the new chief justice.