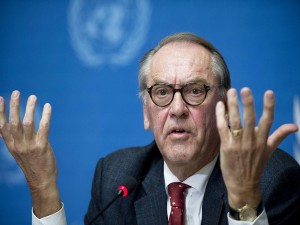 UN Deputy Secretary-General Jan Eliasson says the report on Sri Lanka on the UN actions during the final stages of the war was taken seriously.

â€œI was asked by the Secretary-General, to head a group to look, go through the recommendations of the report, and above all, look forward to the future so that we avoid coming in such situations as we did in Sri Lanka, and as we have in several other tragic situations. This group was established in January, and they have worked very diligently. It is co-chaired by Andrew Gilmour of the Political Unit, and Paul Akiwumi, my Chief of Staff. And we have a very good secretariat headed by Michael Keating, who is a very respected colleague, who was the Deputy SRSG [Special Representative of the Secretary-General] in Afghanistan,â€ the UN qouted him as saying.

He said that he found most important was to bring was to bring in all the agencies, departments, programmes, funds, who indirectly or directly are involved in the situation or the role of the United Nations in Sri Lanka.

â€œSo, we have had a working group with representatives of all groups working very intensely on taking these recommendations seriously. We also have invited experts from the outside for hearings. Today, I had a hearing with a group of very respectable colleagues of mine and many others â€” Jan Egeland, Staffan De Mistura, Michael Van Den Schulenberg â€” I canâ€™t give you the whole list, but we had a video conference of one and a half hours today, where we got their reactions to the report. So, it is a big process right now. And I suppose I will, within a month or so, receive the report and then it is up to me to assess these recommendations and go to the Secretary-General and discuss what measures should be taken. I hope this whole process will be finished by the middle of June at the latest, I would hope. We take it very seriously,â€ he added.

Jan Eliasson says the UN now needs to really prepare as good as possible for such a situation in the future.