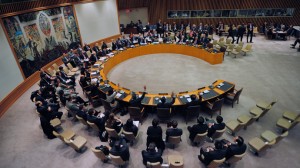 The UN Security Council has adopted a resolution expanding sanctions against North Korea. The new resolution, which was drafted by the US and China, was in response to Pyongyang’s third nuclear test.

The resolution was approved unanimously by the 15-nation council, after three weeks of negotiations between the US and China.

It calls on the implementation of tighter financial restrictions on North Korea, and for a crack down on its attempts to ship and receive banned cargo in breach of UN sanctions. It also calls on states to deny aircraft permission to take off, land or fly over their territory if illicit cargo is suspected to be on board.

It goes on to condemn North Korea’s ongoing nuclear activities, including its uranium enrichment. It stresses the UN Security Councilâ€™s commitment Â “to a peaceful, diplomatic and political solution,â€ and urges that six-party nuclear talks be resumed.

UN Secretary-General Ban Ki-moon has welcomed the council’s move, saying that the resolution “sent an unequivocal message to (North Korea) that the international community will not tolerate its pursuit of nuclear weapons.”

In anticipation of the resolution’s adoption, North Korea previously threatened to cancel the 1953 ceasefire that ended the Korean War.

On Thursday, a spokesman for North Korea’s Foreign Ministry said his country may deliver a pre-emptive nuclear strike against its enemies in case an attack on Pyongyang is launched.Â

“Since the United States is about to ignite a nuclear war, we will be exercising our right to a preemptive nuclear attack against the headquarters of the aggressor in order to protect our supreme interest,” said the statement carried by the official KCNA news agency.

Pyongyangâ€™s third nuclear test, which took place on February 12, was in defiance of three council resolutions which ban North Korea from testing or using nuclear or ballistic missile technology.

The US and its allies fear the nuclear test pushes North Korea closer to gaining nuclear-armed missiles. (RT News)