<![CDATA[The UN general assembly was set to vote overwhelmingly to recognise Palestine as a state, a diplomatic breakthrough for its leader, Mahmoud Abbas, in the face of vigorous Israeli and US opposition. <a href="http://www.eelamenews.com/?attachment_id=106551" rel="attachment wp-att-106551"> 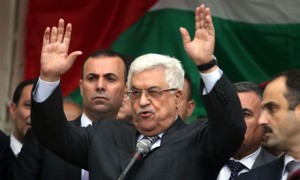 The move required only a simple majority of the 193-member general assembly. Even before voting began, at least 130 countries had publicly pledged to line up behind Palestinian statehood. Among European countries, France, Italy, Spain, Norway, Denmark and Switzerland all said they would vote yes, while Germany planned to abstain. A small number of countries planned to join Israel and the US in voting no. The vote was held on a symbolic date, the 65th anniversary of the UN partitioning what had been British-ruled Palestine into Jewish and Arab countries. In the decades that followed, the idea of an independent Palestine was often in danger of disappearing. The Palestinian president, speaking at the start of the general assembly, said: “We are humbled by this historic support and to say on this day: your support is more vital than ever at this critical, decisive moment in time.” Abbas added: “We have faith that every person with conscience in the world, and every state respecting the UN charter, will support and contribute to enabling our people to exercise their right to self-determination and to achieve independence in their state of Palestine, with East Jerusalem as its capital.” The vote came after eight days of conflict between the Israelis and Palestinians earlier this month that left an estimated 158 Palestinians dead in Gaza, and six Israelis killed. The Israeli prime minister, Binyamin Netanyahu, speaking from Jerusalem, downplayed the vote. In spite of a huge diplomatic operation by Israel to block the vote, Netanyahu insisted it had no significance. “The decision at the United Nations will change nothing on the ground. It will not advance the establishment of a Palestinian state. It will delay it further.” He added: “No matter how many hands are raised against us there is no power on earth that will cause me to compromise on Israel’s security.” The diplomatic victory for Abbas, who heads the Fatah group that controls the West Bank and is widely regarded as a moderate, helps offset a little the prominence achieved by the rival Palestinian faction Hamas during the Gaza conflict. Some countries, especially in Europe, switched from abstention to support out of a feeling that Abbas needed to be bolstered. The Israeli and US governments had piled pressure on the Palestinians not to press the issue to a vote and threatened major retaliation, mainly punitive financial measures. They have since largely backtracked, concernedÂ  this might undermine Abbas at a time when he is particularly vulnerable. At the General Assembly, the Israeli ambassador said it would not bring achievement of an independent Palestinian state any closer. The voteÂ  raises Palestine from “a non-member observer entity” at the UN to “a non-member observer state”. There are only two with this status, the Vatican and now Palestine, both classified as sovereign states but are not allowed to vote at the general assembly with the other 193 countries. The vote leaves Palestine far short of full UN membership. The reality of Israeli control on the ground also ensures Palestine is far from being an independent state. But the vote is important, andnot just symbolical. ItÂ  allows Palestine for the first time to join international bodies such as the international criminal court. This is one of the main reasons for Israeli opposition, fearful that the Palestinians might try to launch a case over Jewish settlements on the West Bank or over military attacks on the West Bank and Gaza. Palestinian officials say they have no immediate plans to do so but it remains a new and useful lever for the future. The Obama administration, in an effort to try to persuade the Palestinians to drop the vote, sent deputy secretary of state Bill Burns to see Abbas on Wednesday. But Abbas turned down his pleas. The US, Israel and Britain wanted the Palestinians to give explicit pledges they would not seek to join the ICC in the near future and also to resume peace negotiations with the Israelis that were abandoned in 2010 over an settlement expansion. Britain delayed a decision on whether to abstain or vote to see whether Abbas might make the necessary concessions in his general assembly speech. The vote came more than a year after Abbas was rebuffed by the UN security council when he sought full membership. Israel’s foreign minister, Avigdor Lieberman, who flew to New York to meetÂ  UN secretary-general Ban Ki-moon before the vote, threatened two weeks ago that a vote for non-member status would trigger “an extreme response from us”. But the Obama administration, Britain and other countries have pressed Israel to show restraint. The Obama administration is also pushing Congress, which is strongly pro-Israel, not to penalise the Palestinians. US senators have warned that if the Palestinians try to take Israel to court, they will risk losing aid. Admission of the Palestinians to any UN agency automatically triggers the withdrawal of US funding to that agency. Admission of the Palestinians to the United Nations Educational, Scientific and Cultural Organisation last year saw the US withdraw its funding, about 20% of its revenue. (The Guardian)]]>