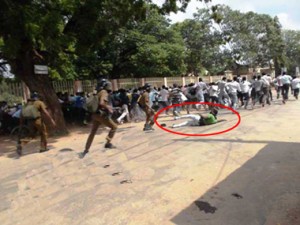 The United Nations Human Rights Council (UNHRC) has been told in a statement submitted by an NGO that there is no freedom of assembly in Sri Lanka.

In a written statement submitted to the 23rd session of the UNHRC which began today, the International Movement against all Forms of Discrimination and Racism (IMADR) notes several incidents reported in almost all parts of the country this year which violated the freedom of assembly.

In Colombo, the NGO says in January, pole bearing goons, allegedly sent by the State, attacked peaceful protestors in the presence of the police.

In addition, following these peaceful protests, many lawyers and civil society activists who participated, have been threatened and fear for their safety.