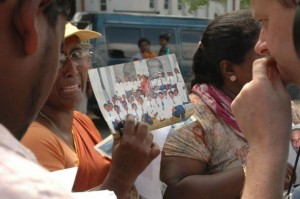 The UN Working Group on Enforced or Involuntary Disappearances has called for urgent action by Sri Lanka with regard to pending cases of disappearances,

The UN Working Group also said that it had transmitted four cases to the Government last year under its urgent action procedure. The first two cases concerned Lalith Weeraraja, Jaffna coordinator of the Jana Aragalaya (Peopleâ€˜s Struggle) movement and an executive committee member of â€˜We Are Sri Lankansâ€™ a student-based organisation which works to defend the rights of Tamil people in

Sri Lanka and Kugan Muruganandan, who went missing in Jaffna on December 9, 2011. The third case concerned Ramasamy Prabaharan, a Tamil businessman of Indian origin, allegedly abducted by seven armed men in civilian clothing, on February 11, 2012. The fourth case concerned Ms. Vasanthamala Pathmanathan, allegedly arrested at a bank near Vavuniya by agents of the Criminal Investigation Department (CID) of the Police on August 21, 2012.

The Working Group said that it regrets that no response was received from the Government to its general allegation on May 4, 2011, concerning serious obstacles encountered in the implementation of the Declaration on the Protection of All Persons from Enforced Disappearances in Sri Lanka during the last phase of the war against the LTTE from 2006 to 2009, notwithstanding a reminder sent on August 13, 2012.

The Working Group recalled the Declaration, which affirms that States must take steps to ensure that persons involved in investigating cases of disappearance, including the complainant, counsel, witnesses and those conducting the investigation, are protected against ill-treatment, intimidation or reprisal.

The UN Working Group on Enforced or Involuntary Disappearances established in 1980, deals with numerous individual cases on a purely humanitarian basis. It acts essentially as a channel of communication between the families of disappeared persons and governments, and works closely with governments concerned with the aim of solving cases of disappearances. The Working Group also provides assistance in the implementation by States of the UN Declaration on the Protection of All Persons from Enforced Disappearance.