<![CDATA[The US government is contemplating significant intervention in the Syria conflict and has discussed employing Patriot Air and Missile Defense Systems in Turkey and directly providing arms to opposition fighters. <!--RTEditor:genereated--> 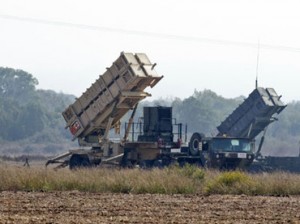 In an attempt to defeat Syrian President Bashar al-Assad, government officials told the New York Times that the US might bring its military resources to the region for either intimidation purposes or direct use in Syria. NATO will likely decide next week whether or not to deploy surface-to-air Patriot missiles in Turkey, which would serve to protect the country from potential Syrian missiles that could contain chemical weapons, as well as intimidate Syrian Air Force pilots from bombing the northern Syria border towns. The armed rebels currently control much of Northwest Syria along the border of Turkey, making the border a likely conflict zone should Syrian missiles be implemented. Although State Department spokeswoman Victoria Nuland said the Patriot missile system would not be used beyond the Turkish border, military sources told Israeli news service DEBKAthat all of northern Syria – including Aleppo and Homs – would become controlled by the Turkish-NATO team. The US has so far hesitated to intervene on the ground in Syria, fearing the risks would be too great for their own soldiers and could worsen the conflict. But 18 months after the start of the civil war, intervention has increasingly entered the US radar. “The administration has figured out that if they don’t start doing something, the war will be over and they won’t have any influence over the combat forces on the ground,” former Defense Intelligence Agency officer told the New York Times. “They may have some influence with various political groups and factions, but they won’t have influence with the fighters, and the fighters will control the territory.” The US has so far provided nearly $200 million in humanitarian aid, but has not intervened militarily. But US officials believe the administration is now considering providing arms to the opposition groups. CIA officers located in Turkey have already determined which groups should receive such weapons, but have emphasized the difficulty of preventing them from falling into the wrong hands. The Obama administration is also preparing to recognize Syria’s new opposition council as the official representation of Syria, likely during a Dec. 12 “Friends of Syria” conference in Morocco which Secretary of State Hillary Clinton will attend, the Associated Press reports. The recognition will likely spur further US involvement in the conflict – if not militarily, then it will at least draw more humanitarian aid. Britain, France and several Arab countries allied with the US have already recognized the council as Syria’s sole representative. But while the idea of providing arms may be considered, many still believe it to be a bad idea. “Arms are not a strategy; arms are a tactic,” US Ambassador to Syria Robert Ford said during a conference in Washington. “A military solution is not the best way for Syria. Efforts to win this by conquering one side or the other will simply prolong the violence and actually aggravate an already terrible humanitarian situation. Syria needs a political solution.” The US government has not made any official announcements that it was considering providing weapons, but the Congressional officials and diplomats told the Times that a decision would likely be made after Obama selects his new national security team. (RT News)]]>