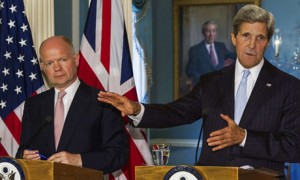 National security advisers met in Washington on Wednesday, to consider what further steps the US can take to help Syria’s struggling rebel groups.

Amid fears of a new Syrian government offensive against the rebel-held city of Aleppo, the British foreign secretary, William Hague, warned that the prospects of a negotiated solution to the conflict were fading unless help was given to counter mounting Iranian involvement in the war.

But the US secretary of state, John Kerry, who discussed Syrian options at a bilateral meeting with Hague in Washington, said the White House had not yet made a decision on greater intervention. President Barack Obama was not present at the national security meeting, as he was travelling on Democratic party business.

“People are talking about what further options might be exercised here,” said Kerry in a press conference following the meeting with Hague. “We obviously had some discussions about that too but we have no announcements to make today.”

He added: “We are going to have to make judgements about how we help the opposition.”

The British government warned that military setbacks among the rebels may make it harder to force President Bashar al-Assad to the negotiating table, as Washington hopes.

US officials told the Associated Press that growing alarm over the Assad regime’s rapid military advance is still unlikely to translate into any US policy shift toward deeper involvement in the conflict. The AP reported that officials at the White House, the Pentagon and in the intelligence community remain hesitant about providing weapons, ammunition or other lethal support. Instead, they are focused on non-lethal support, such as Wednesday’s decision by the Treasury Department to ease restrictions on Syrian telecommunications, agricultural and petroleum transactions that benefit the opposition.

Earlier, there were subtle increases in rhetoric from the State Department, but no change of policy.

“We have refocused our efforts on figuring out what to do to help the opposition on the ground,” said a State Department spokeswoman, Jen Psaki, who described Syrian helicopter attacks in Lebanon as an “unacceptable escalation”. “Nobody wins in Syria the way things are going,” said Kerry, later. “The people lose and Syria as a country loses. And what we have been pushing for, all of us involved in this effort, is a political solution that ends the violence, saves Syria, stops the killing and destruction of the entire nation.” (The Guardian)