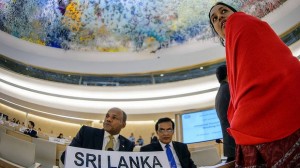 A visiting US delegation confirmed this evening that a resolution on Sri Lanka will be submitted at the February-March UN Human Rights Council session in Geneva. Deputy Assistant Secretary of State James Moore told reporters in Colombo this evening that the resolution is a â€œproceduralâ€ move after the country put forward a resolution against Sri Lanka last March as well. Deputy Assistant Secretary of State James Moore, Deputy Assistant Secretary of Defense Vikram Singh and Deputy Assistant Secretary of State Jane Zimmerman arrived in Sri Lanka on Saturday morning. Moore said the delegation had constructive and candid meetings with the Sri Lankan government, military, political parties, and civil society in both Colombo and Jaffna. They also met with the Sri Lankan Secretary of Defense and war criminal Gotabhaya Rajapaksa and military commanders and will be meeting with the Minister of Economic Development Basil Rajapaksa, Minister of External Affairs G.L. Peiris, Secretary to the President Lalith Weeratunga and other officials. â€œIn all of our meetings we are discussing Sri Lankaâ€™s efforts to implement its Lessons Learnt and Reconciliation Commission recommendations and National Action Plan, and the importance of accelerated progress to achieve lasting reconciliation and a durable peace. Key to this will be transparent governance, as well as following through with a process of accountability for events at the end of the war, including civilian casualties and credible allegations of human rights violations,â€ he said. He said that they had also discussed the importance of a vibrant civil society, an independent judiciary, a free and independent media, and full respect for human rights. â€œWe welcome the governmentâ€™s intent to have Northern Provincial Council elections in September and we encourage a resumption of talks between the TNA and the government,â€ he added.]]>