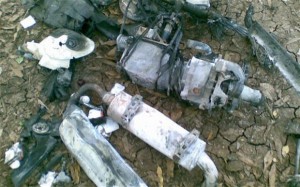 Pictures claiming to show the downed aircraft were posted on Twitter by the al-Qaeda-linked group, which celebrated the crash saying: “This one will no longer be able to spy on Muslims again.”

A US defence department official confirmed the incident but declined to say what kind of aircraft it was, what caused it to crash and whether it was carrying weapons.

“I can confirm an RPA (remotely piloted aircraft) crashed in a remote area of the Somali coastline south of Mogadishu,” the official told Agence France Presse on condition of anonymity. “The incident is under investigation.”

Abdikadir Mohamed Nur, the governor of the Lower Shabelle region where the drone crashed, said that al-Shabaab militants had shot at the aircraft over the town of Bulamareer for several hours before it crashed. “Finally they hit it and the drone crashed,” he told Reuters.

Bulamareer residents said al-Shabaab fighters who control the area had kept them away from the crash site.

“Al-Shabaab fighters surrounded the scene. We are not allowed to go near it,” resident Aden Farah told Reuters.

The US is supporting the Somali government and African Union forces as they struggle to contain the activities of al-Shabaab.

The Islamic group was forced out of Mogadishu in August 2011 but has carried out a series of suicide bomb attacks there since, that have killed scores of people.

Bulamareer was the scene of an operation in January by French special forces to free one of their number who was kidnapped in Somalia in 2009.

The operation failed and hostage Denis Allex died along with several other people.

Al-Shabaab said on its Twitter account that its “intelligence teams” had gathered the wreckage of the drone and transferred it “to a safe location”.

“This one is off to the scrap yard, Schiebel! You are fighting a losing battle. Islam will prevail,” the group wrote on @HSMPress1.

Schiebel is a Vienna-based company that manufactures, among other things, Unmanned Aerial Vehicles (UAVs).

Al-Shabaab also suggested that the drone’s presence above Somalia contradicted the stated policy of America on drones. Last week, President Barack Obama moved control of drones from the CIA to the defence department, and said that strikes would be limited only to those cases where the target represented a “continuing and imminent threat”.

Al-Shabaab said of the drone crash: “So much for the empty rhetoric on the drone program!” “Repeatedly, signs of Allah’s absolute control over all affairs are demonstrated in this war” it added.

After a series of suspected drone strikes in Somalia in 2010 and 2011, the US confirmed it was using the UAVs over the country in June last year.

“In a limited number of cases, the US military has taken direct action in Somalia against members of al-Qaeda, including those who are also members of al-Shabaab, who are engaged in efforts to carry out terrorist attacks against the United States and our interests,” the White House said in a report to Congress on the state of US combat operations abroad. (The Telegraph)