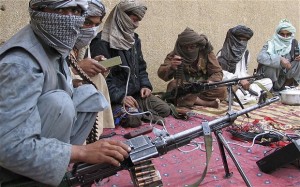 The US will engage in its first formal direct talks with the Taliban on Thursday, according to officials, in a milestone on the road to peace after more than a decade of war.

The first meeting will take place in Doha, the Qatari capital, after the Taliban opened their first official overseas office and Washington dropped its long-standing demand that the movement renounce ties with al-Qaeda as a precondition for the talks.

Afghan peace negotiators will also travel to Qatar for talks, according to President Hamid Karzai, speaking as Nato officially transferred authority to Afghan national forces on the ground in Afghanistan.

The challenges ahead were underlined however by a suicide attack only a few miles from where Mr Karzai was speaking. The Taliban has repeatedly refused to meet Afghan peace envoys.

After months of behind-the-scenes negotiations however, including some in Norway according to Espen Barth Eide, the country’s foreign minister, the movement has now agreed to open the Doha office to facilitate talks.

“The office is to open dialogue between the Taliban and the world,” Taliban spokesman Zabiullah Mujahid said, although he made no reference to peace talks or the Afghan government. “The Islamic Emirate Of Afghanistan [the group’s formal name] doesn’t want any threats from Afghanistan soil to other countries, and neither permits anyone to threaten other countries using Afghanistan soil.

“We support a political and peaceful solution that ends Afghanistan’s occupation, and guarantees the Islamic system and nationwide security.”

None of the parties are expecting any imminent breakthrough, but US officials described the opening of negotiations with the Taliban as an “important development” on the road to reconciliation.

They were at pains to be realistic about the road ahead, conceding that levels of trust between parties were “extremely low”.

Officials said the first meeting would simply be an “exchange of agendas” in which both sides laid out what issues they wanted to address. It could be followed by a second meeting in coming weeks.

Recalling the Northern Ireland peace process took years to complete, senior Obama administration officials said the Taliban office was “the first step on what – if it is successful – will be a very long road”, adding that there was “no guarantee that this process will happen quickly, if at all.”

One official significantly added that a requirement for the Taliban to drop relations with al Qaeda – something which had stymied previous attempts at direct talks – was no longer necessary in order for them to progress.

“We’ve long had a demand on the Taliban that they make a statement that distances themselves from the movement from international terrorism, but made clear that we didn’t expect immediately for them to break ties with al Qaeda, because that’s an outcome of the negotiation process,” the official said.

President Barack Obama, speaking at the G8 summit in Northern Ireland, called the opening of the Taliban’s political office an important step toward reconciliation between the group and the Afghan government, although he predicted the road ahead will be long and complicated.

David Cameron, the Prime Minister, gave his backing to the talks.

“We need to match the security response in Afghanistan … with a political process to try to make sure as many people as possible give up violence, give up an armed struggle and join the political process,” he said. “It’s the right thing to do – of course it involves all sorts of difficulties.”

Graeme Smith, of the International Crisis Group, said members of the High Peace Council themselves do not expect much progress.

“The main forces that were killing a lot of insurgents in recent years are leaving,” he said. “The insurgents don’t have a whole load of incentive to negotiate until they find out where the military balance lies after the withdrawal.”

“From tomorrow, our security and defence forces will now be in the lead,” he said. “From here, all security responsibility and all security leadership will be taken by our brave forces.”

Some 97,000 international troops remain in the country. From now until the end of next year their role will be largely to train and advise local forces.

The transfer of the last 95 districts from Nato to Afghan control include some of the areas still affected by Taliban attacks, including Kandahar — the spiritual home of the movement — and territories that border Pakistan.

Anders Fogh Rasmussen, Nato secretary-general, was in Kabul for the handover. He said the coalition will help militarily if and when needed but will no longer plan, execute or lead operations.

“Ten years ago, there were no Afghan national security forces. Five years ago, Afghan forces were a fraction of what they are today,” he said.

“Now you have 350,000 Afghan troops and police. A formidable force. And time and again, we have seen them dealing quickly and competently with complex attacks. Defeating the enemies of Afghanistan, and defending and protecting the Afghan people.” (The Telegraph)