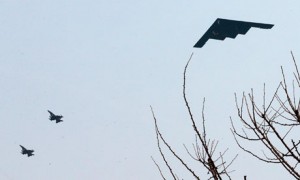 The US has taken the unprecedented step of publicly announcing that two of its nuclear-capable B-2 bombers have taken part in military exercises with South Korea, dropping dummy munitions on an island range, in what is taken to be a show of force following weeks of North Korean hostility.

The announcement on ThursdayÂ  is likely to further enrage Pyongyang, which has already issued a flood of ominous statements to highlight its displeasure at the exercises and at UN sanctions over its nuclear test last month.

But there were signs on Thursday that it is willing to go only so far. A North Korean industrial plant operated with South Korean know-how was running normally, despite the north’s shutdown a day earlier of communication lines ordinarily used to coordinate the movement of workers and goods across the border.

US Forces Korea said that the B-2 stealth bombers had flown from Missouri. It is unclear whether America’s stealth bombers have taken part in past exercises with South Korea, but this is the first time the military has announced their use. The revelation follows an earlier US announcement that nuclear-capable B-52 bombers participated in the joint drills.

North Korea sees the exercises as part of a US plot to invade and becomes particularly upset about US nuclear activities in the region. Washington and Seoul say the drills are routine and defensive.

North Korea has already threatened nuclear strikes on Washington and Seoul in recent weeks. It said on Wednesday that there was no need for communication in a situation “where a war may break out at any moment”. Earlier this month, it announced that it considers the armistice that ended the Korean War in 1953 void.

But Pyongyang would have gone beyond words, possibly damaging its own weak finances, if it had blocked South Koreans from getting in and out of the Kaesong industrial plant, which produced $470m worth of goods last year. South Korean managers at the plant reported no indication of trouble on Thursday.

Analysts see a full-blown North Korean attack as extremely unlikely, though there are fears of a more localised conflict, such as a naval skirmish in disputed Yellow Sea. Such clashes have happened three times since 1999.

The Kaesong plant, just across the heavily fortified demilitarized zone that separates the two countries, normally relies on a military hotline by which the governments coordinate the movement of goods and South Korean workers.

Without the hotline, the countries, which do not have diplomatic relations with each other, used go-betweens. North Korea verbally approved the movement of hundreds of cross-border workers on Thursday by telling South Koreans at a management office at the Kaesong factory. Those South Koreans then called officials in their own country.

Both governments prohibit direct contact with citizens on the other side, but the Kaesong plant has separate telephone lines that allow South Korean managers there to communicate with people at home.

Factory managers at Kaesong reached by AP by telephone at the factory said the overall mood there was normal.

“Tension rises almost every year when it’s time for the US-South Korean drills to take place, but as soon as those drills end, things quickly return to normal,” Sung Hyun-sang said in Seoul, a day after returning from Kaesong. He is president of Mansun Corporation, a clothing manufacturer that employs 1,400 North Korean workers and regularly stations 12 South Koreans at Kaesong.

“I think and hope that this time won’t be different,” Sung said.

Technically, the divided Korean peninsula remains in a state of war. North Korea last shut down communications at Kaesong four years ago, and that time some workers were temporarily stranded.

This time, South Korea urged the north to quickly restore the hotline, and the US state department said the shutdown was unconstructive.

North Korea’s latest threats are seen as efforts to provoke the new government in Seoul, led by President Park Geun-hye, to change its policies toward Pyongyang. Its moves to order troops into “combat readiness” also are seen as ways to build domestic unity as young leader Kim Jong-un, who took power after his father’s death in December 2011, strengthens his military credentials.

The Kaesong complex is the last major symbol of inter-Korean co-operation. Other projects set up during a previous era of detente have stopped as tension has risen in recent years.

At the border on Thursday, a trio of uniformed South Korean soldiers stood to one side of a gate as white trucks rumbled through, carrying large pipes and containers to Kaesong.

North Korea in recent weeks has cut other phone and fax hotlines â€“ with South Korea’s Red Cross and with the American-led UN command at the border. But three hotlines used only to exchange information about air traffic were still operating normally on Thursday, according to South Korea’s air traffic centre.