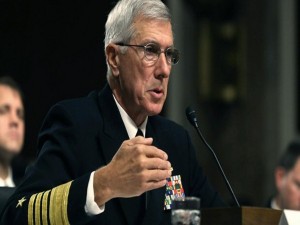 Admiral Samuel Locklear, Commander of the US Pacific Command (PACOM), told US lawmakers during a Congressional hearing yesterday that Sri Lanka must reconcile with the end of the war.

He said that Sri Lanka needs to work to move past its recent history and reconcile a nation divided by many years of civil war.

The US Commander also said that Lashkar-e-Taiba (LeT), which was responsible for the Mumbai terrorist attack and other high-profile terrorist attacks in India over the past several years, remains one of the most potent terror group in South Asia, the Press Trust of India reported.

â€œLashkar-e-Taiba (LeT) remains one, if not the most operationally capable terrorist groups through all of South Asia,â€ Admiral Locklear said.

Indiaâ€™s relationship with Pakistan has gradually improved in recent years, thanks to a series of confidence building measures, growing economic ties and the absence of large-scale destabilising incidents, the PACOM Commander said.

â€œHowever, we remain concerned that the progress could be quickly undone by a major terrorist attack,â€ he said.

â€œBoth sides maintain modern, trained militaries underpinned by demonstrated nuclear capabilities. A major war on the subcontinent is not likely, but could be catastrophic to both sides, as well as the region,â€ Locklear said.

In addition, while India has seen its bilateral economic ties with China expanded in recent years, its unresolved border disputes with China have remained a source of friction, the US official said.

â€œWe do not think war between India and China is inevitable or likely, but unresolved territorial issues and regional competition could fuel incidents,â€ Locklear said.

â€œElsewhere, South Asia is mostly free from direct conflict, but various, mostly internal, challenges remain. For instance, Bangladesh may struggle to contain political violence and turmoil as they face national elections early next year. Sri Lanka needs to work to move past its recent history and reconcile a nation divided by many years of civil war,â€ the PACOM Commander said.

Observing that demand for water, food, and energy will only grow in coming years in the region, Locklear said the friction caused by water availability and use is evident among the Asian countries, including India, Pakistan and Bangladesh.