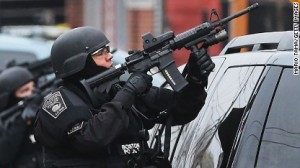 Two men terrorized Bostonians with violence overnight, and police believe they could be the same men who planted bombs that killed three in the Boston Marathon Monday.

US police have started an operation searching for the suspects after a police officer was shot dead at the Massachusetts Institute of Technology (MIT) .

One suspect was hit by bullets during the chase and later died, in a car -chase that followed, police say. The men threw bombs and traded gunfire with police before being stopped at Watertown.

Police later said they were looking for “suspect number two”, the “white-capped individual”.

According to CNN, police spokesman Captain Paul MacMillan has warned that the second suspect is still at large, and believed to be armed and dangerous.

Officers from various police departments and the FBI are searching house to house in the neighborhood of Watertown, Massachusetts, to try to track him down.

An officer was also critically wounded in the chase.

The FBI has released several images of two men they were hunting in relation to Monday’s marathon bombing.

One suspect in the Boston Marathon bombings is dead. The other — his brother — was on the run Friday, pursued by an army of law enforcement officials whose manhunt virtually shut down the city.

A man identified by several sources as Tamerlan Tsarnaev, 26, died after an overnight shootout with police. He’s the man described Thursday by the FBI as black-capped Suspect No. 1 in the attacks Monday that killed three.

His brother, Dzhokar Tsarnaev, apparently escaped — leading police to throw a huge dragnet around the region. In photos released by the FBI of the bombing suspects, the younger brother is seen wearing a white cap. The agency called him Suspect No. 2.

— Police, often with guns drawn, continued to chase leads in pursuit of the surviving suspect. In Watertown, reporters were cordoned off and told to stay back.

— A Maryland man who said he was the suspects’ uncle told reporters the two men had brought shame on their family and all ethnic Chechens with the attacks, which he called an atrocity. “If you’re alive, turn yourself in and ask for forgiveness,” Ruslan Tsarni urged his nephew.

— A former teacher at the high school Dzhokar Tsarnaev attended, who lives near Tsarnaev’s residence now, described the younger brother as “a wonderful kid” who seemed incapable of such violence.

— Tamerlan Tsarnaev was wearing explosives and a triggering device when he died, a source briefed on the investigation told CNN’s Deborah Feyerick.

Police ordered businesses in the suburb of Watertown and nearby communities to stay closed and told residents to stay inside and answer the door for no one but authorities. Boston authorities advised the same. The city’s subway, bus, Amtrak train systems and Greyhound and Bolt Bus — a regional carrier — have been shut down. Taxi service across the city also was suspended for time during the manhunt. Every Boston area school is closed.

The search followed a violent night in which authorities say the men allegedly hurled explosives at pursuers after killing Massachusetts Institute of Technology police Officer Sean Collier, robbing a convenience store and hijacking a car.

Police warned Watertown residents to lock their homes and stay away from their windows and doors.

Oluwaseun Odewale, who lives in Arlington, described his neighborhood as “deathly quiet.”

“All my doors are double-locked. It’s silent all around, there are no usual sounds of cars, nothing,” he said.

Police officers in full body armor, carrying automatic weapons, flooded the area, traveling the streets in convoys and going door-to-door to track the suspect down.

“We need more time,” he said. “We’re making significant progress up there. But it may take hours to do this.”

“This situation is grave,” Alben said earlier. “This is a very serious situation that we are dealing with.”

The violence began late Thursday with the robbery of a 7-Eleven convenience store, according to Alben.

Soon after, in Cambridge, across the Charles River from Boston, Massachusetts Institute of Technology police officer Sean Collier was fatally shot while he sat in his car, the Suffolk County District Attorney’s Office said in a statement. Police believe the bombing suspects were responsible for the shooting.

The two suspects, according to authorities, then hijacked a car at gunpoint in Cambridge. They released the driver a half-hour later at a gas station.

As police picked up the chase, the car’s occupants threw explosives out the windows and shot at officers, according to the district attorney’s office.

Officers fired back, wounding Tamerlan Tsarnaev. He later died at Beth Israel Hospital. A source briefed on the investigation says Tsarnaev was wearing explosives and an explosive trigger when his body was recovered. His brother apparently escaped.

Richard H. Donohue Jr., 33, a three-year veteran of the transit system police force, was shot and wounded in the incident and taken to a hospital, a transit police spokesman said Friday. The officer’s condition was not immediately known.

Details about the suspects

Police believe the brothers are the same men pictured in images released Thursday by the FBI as suspects in the marathon bombing that killed three people Monday.

The men are shown in the images walking together near the marathon finish line.

The first suspect — apparently Tamerlan Tsarnaev, according to authorities — appears in the images wearing a dark hat, sunglasses and a backpack. The second suspect, wearing a white cap, is the one who remains at large, police said.

The men moved to the United States at least a few years ago, according to sources.

According to a source briefed on the investigation, the brothers came from the Russian Caucasus and had moved to Kazakhstan at a young age before coming to the United States several years ago.

A statement from the office of Chechnya’s president echoed that: “According to preliminary information, coming from the relevant agencies, the Tsarnaev family moved many years ago out of Chechnya to another Russian region,” press secretary Alvi Kamirov told Russia’s semi-official Interfax news agency. “After that they lived for some time in Kazakhstan, and from there went to the U.S. where the family members received a residence permit. Therefore the individuals concerned did not live as adults in Chechnya.”

Two sources told CNN Dzhokar Tsarnaev came to the U.S. as a tourist with his family in the early 2000s and later asked for asylum. He became a naturalized U.S. citizen in 2012. Tamerlan Tsarnaev was not a naturalized citizen, a source said. He came “a few years later” and was lawfully in the United States as a green-card holder.

Tamerlan Tsarnaev had studied at Bunker Hill Community College and wanted to become an engineer, the source said. He then took a year off to train as a boxer.

The source said that a posting on a social media site in his name included the comments: “I don’t have a single American friend. I don’t understand them.”

“We hung out; we partied; we were good high school friends,” Mercado told CNN.

“We’re all, like, in shock. We don’t really understand. There were no telltale signs of any kind of malicious behavior from Dzhokar. It’s all coming as a shock, really.”

Mercado said he lived a block away from the suspect and did not know his older brother.

Dzhokar Tsarnaev is currently registered as a student at University of Massachusetts Dartmouth, which ordered its campus evacuated on Friday. The school is located 65 miles south of Cambridge, just west of New Bedford.

Larry Aaronson, Dzhokar Tsarnaev’s neighbor and a former teacher at the high school Tsarnaev attended, called him a “wonderful kid.”

“He was so grateful to be here, he was compassionate, he was caring, he was jovial,” Aaronson told CNN. (CNN)