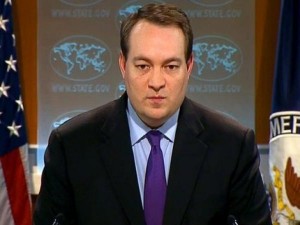 The new resolution to be submitted by the United States at the ongoing UN Human Rights Council session in Geneva will build on the 2012 resolution, the US State Department has said.

â€œWell, we do intend to, as I mentioned yesterday, sponsor resolution at the UN Human Rights Council current session. It will build on the 2012 resolution, which called on Sri Lanka to do more to promote reconciliation and accountability. The resolution will ask the Government of Sri Lanka to follow through on its own commitments to its people, including implementing the constructive recommendations from the report by Sri Lankaâ€™s Lessons Learnt and Reconciliation Commission. So thatâ€™s really the content of the resolution and weâ€™re cosponsoring â€“ weâ€™re sponsoring it and support it,â€ he said.

On Thursday Ventrell was asked to comment on the new report by Human Rights Watch which alleges human rights abuses in Sri Lanka.

He said the Government of Sri Lanka had not initiated a full, credible, or independent investigation into longstanding allegations of human rights abuses in Sri Lanka, including sexual assault.