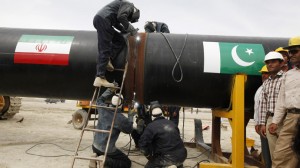 The US has threatened Islamabad with sanctions over Pakistanâ€™s partnership with Iran to construct a section of a gas pipeline. Washington said that the much-delayed $7.5-billion project violates sanctions on Iran, a claim denied by Pakistan.

Iran and Pakistan expect the completed pipeline will deliver 21.5 million cubic meters (760,000 million cubic feet) of gas per day to Pakistan from its giant offshore South Pars field in the Persian Gulf by December 2014.

Iranian contractors will construct the pipeline, which crosses Pakistani territory. Tehran has agreed to lend Islamabad $500 million, one-third of the estimated $1.5 billion cost of the 750-kilometer pipeline, according to Fars news agency.

After Iranian President Mahmoud Ahmadinejad and his Pakistani counterpart Asif Ali Zardari launched the project on Monday on the Iran-Pakistan Border, the US threatened to respond with sanctions if the project â€œactually goes forward.â€

â€œWe have serious concerns if this project actually goes forward that the Iran Sanctions Act would be triggered,â€ State Department spokesperson Victoria Nuland said, commenting on the so-called â€˜peace pipeline.â€™

Iran has completed 900 kilometers of the pipelineâ€™s segment on its side of the border with Pakistan. Monday’s ceremony marked the beginning of work on the Pakistani segment, which will start at the Iranian town of Chahbahar near the border.

â€œWe’ve heard this pipeline announced about 10 or 15 times before in the past. So we have to see what actually happens,â€ Nuland said.

Conceived in 1990s, the project initially involved Iran, Pakistan and India. However, India pulled out of the project in 2009, citing cost and security issues. The United States has persistently opposed Pakistani and Indian involvement in the project, insisting it would violate sanctions against Iran over its controversial nuclear activity.

Nuland reiterated that the US is working to increase Pakistanâ€™s energy supplies through other means: â€œThis pipeline project, if it actually goes forward â€“ we’ve seen that promise many times â€“ would take Pakistan in the wrong direction right at a time that we’re trying to work with Pakistan on better, more reliable ways to meet its energy needs.â€

The US is “supporting large-scale energy projects in Pakistan that will add some 900 megawatts to the power grid by the end of 2013,” she added.

With Pakistan currently facing energy shortages, Washington appears reluctant to keep its pledge despite its assurances.

â€œThe Americans have only given promises and signed some kind of memorandum of understanding on this issue, but nothing has been implemented on the ground,â€ RTâ€™s Tariq Mahiyuddin, who is currently in Pakistan, said.

Pakistan sees the pipeline as a way of easing severe energy shortages, which have sparked demonstrations and battered a weak government. At the same time, Islamabad needs the financial aid it receives from the US. Â

In response to Washingtonâ€™s threats of sanctions, President Ahmadinejad accused “foreign elements” of using Iranâ€™s nuclear program as a pretext to thwart Iran-Pakistan relations, saying they have no grounds to oppose the pipeline project since it deals with natural gas. Â

“With natural gas you cannot make atomic bombs. That’s why they should have no excuse to oppose this pipeline,” Reuters reported, quoting a translation of a televised statement by Ahmadinejad. “I want to tell those individuals that the gas pipeline has no connection whatsoever with the nuclear case.”

â€˜Pipeline undermines US hegemony in the regionâ€™

The Iran-Pakistan pipeline could undermine US hegemony in the Middle East and South Asia, Eric Draitser, an independent geopolitical analyst and founder of StopImperialism.com wrote for RT: â€œThe pipeline brings the two countries closer together and, in so doing, helps to solidify a relationship united by a common mistrust of the US.â€

Anthony Skinner, director of British-based Maplecroft risks consultancy, echoed the idea that Pakistan wants to show its place on the international stage by daring to make decisions that â€œdefy the US.â€

“The Pakistani government wants to show it is willing to take foreign policy decisions that defy the US,â€ Skinner said, according to Reuters. “The pipeline not only caters to Pakistan’s energy needs, but also lodges brownie points with the many critics of the US amongst the electorate.”

Draitser also believes that the â€œpeace pipelineâ€ will be a success, especially if China decides to become involved: â€œIn this very plausible scenario, China would finally get the â€˜holy grailâ€™ it has sought for years: land-based access to energy imports from the Middle East.Â  For China, an energy-starved economy that continues to grow, this would greatly enhance their regional position.â€

â€œIt would also transform the balance of power in Asia, as the era of US domination of energy resources in the Middle East would be over,â€ he added. â€œSo, were the project to be extended to China, the pipeline would become the focus of a new power paradigm, making it one of the most important economic development projects in the world.â€ (RT NEWS)