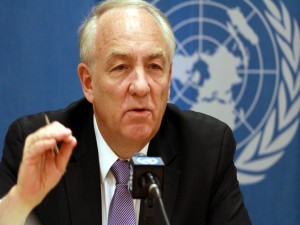 The United Sates says it is looking for Sri Lanka to proceed with accountability and genuine reconciliation and will be watching â€œvery carefullyâ€ to decide what steps may be necessary to be taken again at the UN Human Rights Council (UNHRC).

Speaking at a press briefing at the UN headquarters in New York yesterday (Tuesday) US Ambassador at Large on War Crimes Issues, Stephen J. Rapp said that the US was pleased to note that the UN High Commissioner for Human Rights Navi Pillay will be visiting Sri Lanka in August.

The US had submitted two resolutions on Sri Lanka at the UNHRC over the last two years, both which were adopted by a majority.

Stephen J. Rapp said that the US has spoken â€œloud and clearâ€ on the Sri Lankan issue by its sponsorship of the resolutions which he says had expressed disappointment that the provisions of the Lessons Learned and Reconciliation Commission (LLRC) had not been implemented.

â€œThe particular resolution at this time invites the high commissioner for human rights and her rapporteurs to work with Sri Lankan authorities to overcome these deficits,â€ Stephen J. Rapp said.

He recalled that through the latest resolution the US was also disappointed that the Sri Lankan authorities had not addressed accountability for the alleged grave atrocities committed by both sides in the conflict in Sri Lanka.