<![CDATA[US warships are heading towards North Korea to get the â€œbest situational awarenessâ€ prior to a controversial planned rocket launch. The communist state hopes to launch a satellite into orbit, allegedly using technology banned by the UN. <!--RTEditor:genereated-->Washington is keeping tabs on North Koreaâ€™s proposed rocket launchÂ  this month by sending warships equipped with advanced radar and otherÂ  ballistic missile defense systems to the region. The US military will be watching the planned launch â€œvery closely,â€Navy Admiral Samuel J. Locklear III said. Locklear added that anyÂ  launch of long-range missiles would violate United Nations SecurityÂ  Council resolutions. The move comes after Pyongyang showed noÂ  signs of aborting what will be its second rocket launch this year, with aÂ  launch date set for between December 10th and 22nd. 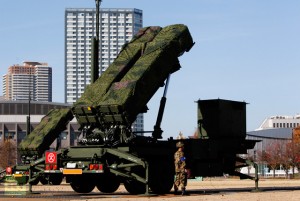 SatelliteÂ  pictures revealed that snowfall may have prevented Pyongyang fromÂ  preparing the rocket for launch, according to GeoEye satellite imagesÂ  provided to AP. However, unnamed officials in Seoul said that all threeÂ  stages of the â€˜Unhaâ€™ rocket had been successfully mounted on the launchÂ  pad by Wednesday. The US and other nations claim the launch is aÂ  cover to test long-range missile technology banned under UN resolutions.Â  Pyongyang insists that the launch is solely to put a satellite intoÂ  orbit. North Korea launched a similar rocket in April 2012, whichÂ  crashed into the waters off the Korean peninsula shortly after liftoff. Previously, Japan announced it would shoot down the North Korean missile if it appeared to threaten Japanese security. Tokyo has issued an order to its military to shoot down any rocket debris that infringes on its territory. The Japanese Navy has deployed two Patriot Advanced Capability-3 batteries on board the JDS Kunisaki on the island of Ishigaki, located roughly 400 kilometers southwest of Okinawa. Patriot systems are also being deployed on Okinawa. Based on coordinates provided by Pyongyang, the rocket is expected to fly south, with its stages dropping into the sea west of the Korean peninsula and then east of the Philippines. The launch window includes two key dates that may be motivating the increased surveillance: December 17 is the first anniversary of the death of North Korean leader Kim Jong-il, and South Korea’s presidential election takes place on December 19. North Korea has yet to successfully launch a three-stage rocket, despite making four attempts since 1998. It is believed to be working on the development of a long-range missile capable of reaching the west coast of the US mainland. North Korea has invested about $480 million in its upcoming rocket launch, South Korean Foreign Minister Kim Sung Hwan told legislators this week. Seoul estimates that the launch site cost $400 million, with another $50 million for parts manufacturing near Pyongyang and $30 million for the satellite itself, Hwan said North Koreaâ€™s military arsenal includes Scud, Rodong and Musudan missiles. The Musudan has a range of more than 3,000 kilometers and can carry a 650-kilogram warhead, according to South Koreaâ€™s defense ministry.]]>