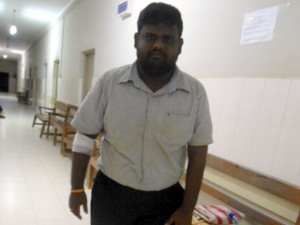 A journalist attached to the Uthayan newspaper based in Jaffna was attacked last night. The journalist, Kunalan Dileep was working on a report for the newspaper on the Northern Provincial Council elections when he was attacked.

He was heading home after work on his motorbike when he was attacked by a group of men who had approached him in a three-wheeler.
The attackers had assaulted him near the Jaffna Mahajana College and then fled the scene.

He was taken to hospital with injuries sustained mostly to his arm and legs which were not serious in nature.
A complaint was lodged with the police over the attack.