MDMK Chief Vaiko has been arrested by Chennai Police after he attempted to lay siege on the Sri Lankan Deputy High Commission today.Â  Mr Vaiko, was protesting against alleged war crimes and human rights violations committed by the Sri Lankan government against Tamil civilians there. 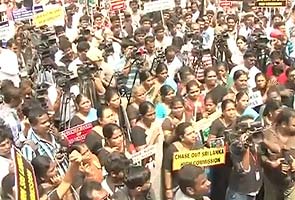 The MDMK chief is demanding that New Delhi should vote against Colombo during the US-sponsored motion at the United Nations Human Rights Council (UNHRC) later this month. He has also demanded for an international probe to be initiated against the Lankan government on charges of war crimes.

Mr Vaiko is joined by political parties in Tamil Nadu, including the Karunanidhi-led DMK, who have been pressing for India to vote against Sri Lanka at the United Nations forum. They allege that ethnic Tamils in the island nation were subjected to atrocities by Sri Lankan forces during the final phase of the war.

In fact, the DMK, in a strong statement in the Rajya Sabha last week, had asked the central government it participates in to decide whether it wanted to be friends with Sri Lanka or then “with your brethren” in south India. DMK is the second-biggest constituent of the Congress-led UPA government at the Centre.