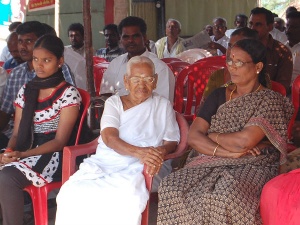 The ongoing anti-Sri Lanka protests might be driven by youth from colleges. But it received a boost on Friday in the form of a nonagenarian protester. It was none other than V Mariammal, the 91-year-old mother of MDMK leader Vaiko.

Mariammal sprang a surprise by joining the hunger strike at Vaiko’s native village, Kalingapatti, near Sankarankoil in Tirunelveli district. Clad in a white khadi sari, Mariammal reached the protest site named as “Balachandran Thidal,” around 9am and sat in the ‘pandal’ named after Muthukumar, who committed self-immolation in 2009 when the war was at its peak. More than 400 men and women cutting across parties joined her in the fast.

“When hundreds of youngsters across the state are staging protests for the past several days, I thought that I should also join them,” Mariammal told reporters. She ended her fast around 5 pm after taking biscuits and lemon juice offered by the MDMK functionaries. After reaching the protest site, she offered floral tributes to the portrait ofÂ  LTTE leader V Prabakaran’s son Balachandran. All the shops in Kalingapatti remained shut during the protest. Black flags were also hoisted atop the houses.

“Vaiko spoke to her over phone and insisted her to take water, at least. But she refused even a drop of water till evening,” said Vaiko’s brother and Kalingapatti panchayat president V Ravichandran. (TOI)