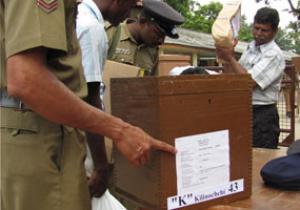 The number of Members of the Sri Lankan Parliament to be elected from the Vanni District has been reduced by one and the number from the Moneragala district increased by one, according to the latest revision by the Sri Lankan Elections Commissioner Mahinda Deshapriya. The number of MPs to be elected from each district is determined by the commissioner annually in proportion to the number of electors registered in each district. The number of registered electors in 2011 in the Vanni district comprising Mannar, Vavuniya and Mullaitivi electorates was 221,409, down from 236,449 in 2010 and 270,707 in 2009. In the Moneragala district comprising Bibile, Moneragala and Wellawaya electorates, in 2011 there were 319,557 registered voters up from 315,452 in 2010 and 308,230 in 2009.]]>