Protesters have gathered in front of the central government in Veneto, Italy to demand an immediate referendum on the regionâ€™s independence from Rome. The reason is mainly economic, according to the rallyâ€™s organizer. 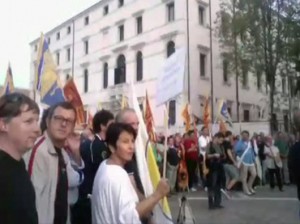 Demonstrators are presenting the local government with a resolution which demands an immediate referendum for the region to become its own country.

The new territory would include Venice, the surrounding region of Veneto, and parts of Lombardy, Trentino and Friuli-Venezia Giulia.

The rally, which was organized by the separatist Indipendenza Veneta party, drew large numbers of energetic protesters.

â€œThe situation here is almost explosive, so today we have thousands of people who have gathered in front of the regional government and weâ€™re going to present to them a resolution signed by thousands of participants to have a referendum for independence,â€ Chairman of the separatist Indipendenza Veneta Party, Lodovico Pizzati, told RT.

The territory would be known as the “Repubblica Veneta,” and would consist of around five million people. Itâ€™s a move that an overwhelming 70 per cent of local residents support, according to a poll conducted by local newspaper Il Gazzettino.

â€œThe main reason is economic. We are in a situation worse than a colony because the tax rate in Italy is the highest the world and our services are extremely poor. We have 20 billion euros missing from our regional resources each year and thatâ€™s unbearable,â€ Pizzati said.

The push for independence shouldnâ€™t come as a total surprise â€“ Venice has only been part of Italy for 146 years.

Historically, Venetians have felt geographically and culturally distant from Rome, and speak with a dialect distinctly different from the rest of the country.

And while some question the regionâ€™s ability to stand alone, Pizzati says the goal is completely attainable.

â€œIt can more than survive on its own. It will be the second richest country in Europe,â€ he said.

Veneto is the latest in a number of European regions to rally for independence, including Catalonia and Scotland. And according to Pizzati, the trend isnâ€™t going away anytime soon.

â€œSicily and Sardinia have strong movements for independence tooâ€¦soon after us, itâ€™s going to happen to other regions of Italyâ€¦and probably in other places in Europe like Belgium or Spain,â€ he said. (RT News)