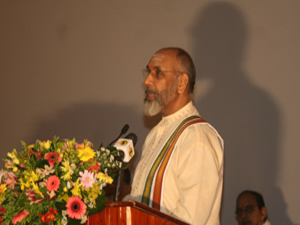 TNA leader R. Sampanthan said that the decision to nominate Vigneswaran was taken at a decisive meeting held by the TNA today.

A TNA statement meanwhile said that the TNA, comprising of five constituent parties, met at the TNA office today to consider the nomination of the candidate for the post of Chief Minister of the Northern Province.

â€œIt was unanimously resolved that the candidate for the position of Chief Minister at the forthcoming Provincial Council elections for the Northen Province would be Mr C V Vigneswaran, a retired judge of the Supreme Court of Sri Lanka. Other nominations will be finalized in due course by the TNA,â€ the TNA said.

The TNA further added that Vigneswaran is a much respected public personality and the TNA appeals to the voters in the Northern Province to wholeheartedly support him, the Chief Minister candidate of the TNA and all other candidates who will be nominated for election.

There was a rift in the TNA over the nomination with the northern members of the Illangai Thamil Arasu Katchi (ITAK) threatening to contest the Northern Provincial council polls independently if Vigneswaran is nominated as the Chief Ministerial candidate by the TNA for the polls.

ITAK is a coalition member of the TNA and they want TNA General Secretary Mavai Senathirajah to be nominated for the post while TNA leader R. Sampanthan was backing Vigneswaran.

According to reports, ITAK members in Jaffna, Vavuniya and also Trincomalee in the East have sent a letter to the TNA leader strongly opposing moves to nominateÂ Vigneswaran.

If the TNA appointsÂ Vigneswaran then ITAK members in Jaffna, Vavuniya, Kilionochchi and Mannar have said they will contest the Northern polls independently and not under the TNA ticket.

While most TNA members feel Mavai Senathirajah is the best candidate since he has been in the North most of his life, others feel Vigneswaran may be best with his legal background.