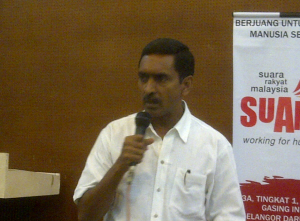 Suaram is pushing for Malaysia to vote in favour of a resolution against Sri Lanka at the United Nations Human Rights Council meeting because of worsening human rights conditions and attacks on mosques.

The meeting will take place in Geneva on March Â 22

â€œMalaysia canâ€™t turn a blind eye to this. We have a vote at the UN Human Rights Council and we must vote in favour of a resolution against Sri Lanka,â€ said Suaram chairman K. Arumugam in a press statement today.

The Sri Lanka Army had been involved in a civil war with the Liberation Tigers of Tamil Eelam (LTTE) since 1983 until 2009 when the LTTE was defeated. Â Over 100,000 civilians mostly from the Tamil ethnic minority died during the conflict. Civilians still live in camps even though a reconciliation plan was announced by the government.

Arumugam also said that Malaysia should vote for the resolution against Sri Lanka due to increasing attacks on Â mosques .

â€œAfter the Tamils, the Muslims are now the new targets of attack in Sri Lanka. Malaysia canâ€™t be seen to support a country where Muslims are facing such a situation,â€ said Arumugam.

Since the UN resolution last year there have been at least eight attacks on mosques and countless protests organised by Â Buddhist organisations.

Malaysia, Sri Lankaâ€™s largest trading partner, chose to abstain from voting on a resolution against Sri Lanka last year despite protests held by Indians in Malaysia in support of the resolution. (FMT)