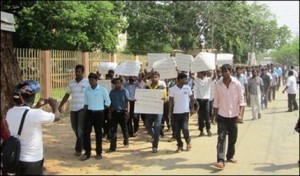 FourÂ Tamil students from the Jaffna University, including the secretary of the student union were arrested by the Kopay Â Sri Lankan police last night. The three students who were arrested are P. Dharshanth (secretary of the student union) and K. Jemomenon from the Arts faculty. Kanesamoorthy SutharsanÂ and S. Solomon, a third year student from the medical faculty. On Wednesday November 28th, a group of students at the University of Jaffna worked to commemorate those who have lost their lives in the struggle for a Tamil nation. In order to shed light on the issue, a silent march occurred were the Sri Lankan military soldiers abruptly interrupted the commemorations. In these altercations, 4 students were detained and 10 other students were injured. Meanwhile, the United States Embassy in Colombo has expressed its concern about recent threats to freedom of expression in Sri Lanka. The Embassy is greatly concerned about reports of attacks on students in Jaffna. We call upon authorities to exercise restraint and respect peaceful demonstrations. But Sri Lankan government, the close ally of the China ignores the US voice and arrested Tamils students as a revenge for the US action.    ]]>