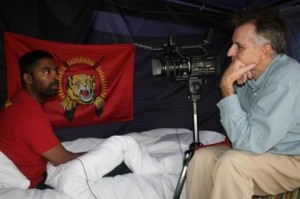 Mr Gobi Sivanthan, a Tamil National activist, organised and participating in a hunger strike in London Olympic village, told to the US based Voice of America that this is to bring international attention to the genocide and to protest against the continued use of â€œSinhala colonisation in Tamil Landâ€ by Sri Lankan forces three years after the civil war.

While addressing to the VOA, he appealed the international community to open independent international investigation over the Sri Lankan governmentâ€™s war crimes against Tamils.

He also insisted to the VOA, that the Tamils are living without basic rights in North and East in Sri Lanka under military rule.

Sivanthan, who lost his father and many friends in the fighting that swept the north of the island in spring 2009, said the world needed to know what had happened in Sri Lanka.

A British Tamil told to the Eelam-e-News thatÂ there are manyÂ Tamils Â in Sri Lanka and overseas who have lost mums and dads, brothers and sisters.Â  We want justice for all those who perished and for those still living.