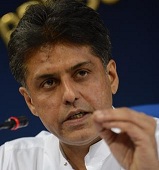 Indian Union Information and Broadcasting Minister Manish Tewari said the Central Government was in no way â€œinsensitiveâ€ to Lankan Tamil issues and the protest was in â€œsyncâ€ with the peopleâ€™s concern in Tamil Nadu.

â€œWe understand the sensitivities which are involved with regard to the issue of Sri Lankan Tamils, especially in Tamil Nadu. We are absolutely in sync with some of the concerns which have been articulated…â€, Mr. Tewari told reporters on Friday.

Mr. Tewari was responding to questions on the protests by the Dravida Munnetra Kazhagam, a key UPA ally, against Sri Lankan President Mahinda Rajapakseâ€™s two-day trip in India.

Tamil parties hold Mr. Rajapaksa instrumental for the sufferings of the ethnic Tamil minority in the island nation.