Britain and US behind drive to create council to represent Syrian rebels, but Russia and main exile opposition group oppose it.

Britain, the US and other western powers are backing a new attempt to create a single coherent Syrian opposition that could take part in peace talks with President Bashar al-Assad’s regime or, if talks fail, provide a channel for greater military support to the rebels. 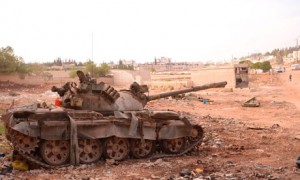 The plan, to be launched in Doha, Qatar, on Thursday, will bring the external opposition together with the revolutionary councils leading the insurrection inside Syria, behind a common programme for a democratic transition. The Syrian National Initiative (SNI) will create a council of about 50 members chaired by Riad Seif, a Sunni businessman who left Syria in June after being imprisoned by the regime.

The Doha initiative has been organised by the Qatari government and has drawn support from the US, Britain and France. Russia, however, opposes the plan, arguing it reneges on an earlier international agreement to pursue the formation of a new government by “mutual consent” of the parties to the conflict. The leadership of the main exile opposition group, the Syrian National Council (SNC), has also criticised the plan, in which its influence will be diluted, and it is not yet clear which of the divided rebel forces inside Syria will turn up on Thursday, or whether they will agree on the common platform once they arrive in Doha.

“It could go as promised, or it could be a train wreck,” said Salman Shaikh, the head of the Brookings Institution Doha Centre, which had helped arrange earlier opposition discussions that paved the way for the Doha meeting. Shaikh has argued that Syria’s collapse as a nation state can only be avoided by unification of the rebels coupled with “a unified, controlled flow of weapons and other support to the Syrian opposition” to prevent a power vacuum and a “free for all”.

The US and its western European allies have so far avoided supplying weapons to the rebels, although US intelligence appears to have played a role in trying to control the flow of arms coming from Qatar and other Gulf opponents of the Assad regime. Observers say that if the Doha initiative is successful, Washington’s policy might change, allowing heavier weapons to be supplied to the opposition, whoever wins the US election on Tuesday.

A western official insisted on Friday that the primary goal of a unified opposition would be to engage in peace talks with the regime about a transition, and so the Doha plan was a way of implementing the June Geneva agreement, rather than a substitute for it, as Moscow had alleged.

The risks that have so far prevented direct western intervention were made clear on Friday with the emergence of a video apparently showing the execution of captured government soldiers in Idlib province. A rebel fighter from the province, Abu Abdul Rahiem, said the killings took place in al-Nayrab to the west of Saraqeb, on the highway between Aleppo and Damascus, which the rebel Free Syrian Army (FSA) claimed to have captured on Friday. He claimed the executions were carried out by a Salafist extremist group, operating outside the command structure of the FSA.

“Assad’s soldiers were inside a military camp in the town. Fighters from the Salafi Dawood brigade overran the camp and captured the soldiers. Initially there were only 10 of them so they could not take the soldiers captive, and had to kill them immediately. No trial could be held because the fighting was still going on. This is guerrilla warfare,” Rahiem told the Guardian.

“We do not wish to turn Syria into another Afghanistan, but we can’t stop these extremists groups. We are really worried about the future of Syria. We need weapons and media support, but there is nothing on the ground.”

Rupert Colville, a spokesman for the UN human rights council, said the video still had to be verified, but added: “The allegations are that these these were soldiers who were no longer combatants. And therefore, at this point it looks very likely that this is a war crime, another one.”

Washington’s decision to swing its support behind the Doha initiative marked a decisive break with the SNC after months of mounting frustration over the exile group’s failure to unite the internal and external opposition.

“We’ve made it clear that the SNC can no longer be viewed as the visible leader of the opposition,” the US secretary of state, Hillary Clinton, said on Wednesday. “They can be part of a larger opposition, but that opposition must include people from inside Syria and others who have a legitimate voice that needs to be heard.”

SNC leaders dismissed the Doha plan. The group issued a statement saying that any attempt to create new bodies to replace the SNC “are an attempt to undermine the Syria revolution by sowing the seeds of division”.

The SNC will hold a congress of its own starting on Saturday in Doha, aimed at restructuring the organisation and electing a new leadership. That new leadership will have to decide by Thursday whether to take up about 15 seats on the 50-member SNI council which have been reserved for it.

“The SNC has not been able to provide a broad-based platform,” Shaikh said. “They’ve been asked to cut themselves down to size. Fifteen seats would still leave them the biggest single group by far. Most other groups will be represented by just one person.”

A western official said: “It is important for the SNC to know that there will be very little tolerance for them if they try to play the spoilers at the Thursday meeting.”

The official said that the Qatar government had made great efforts to ensure that the internal opposition, including the revolutionary councils, would take part in the meeting. Western observers are also due to attend, including the British envoy to the Syrian opposition, John Wilkes, but have not played a central role in the organisation.

“The Qataris have played their cards close to their chest and its not clear they want the same things as us,” the western official said. (The Guardian).