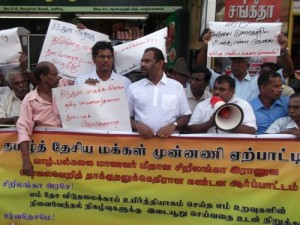 Germany and other Western nations have officially come forward to ensure the establishment of law and order and peace in the country. These Western nations have realized that the foolish acts of the Rajapaksa government have placed the country in peril. The German government has come forward in the matter by inviting members of the Tamil Diaspora for a discussion in Berlin on the 27th. The Global Tamil Forum played a key role at the conference and members of the Tamil National Alliance (TNA), Tamil National Peopleâ€™s Front (TNPF), worldwide Tamil organizations and civil society movements also participated in the meeting. Germany had played the role of the host country while state representatives from South Africa, Norway and Switzerland have also participated at the meeting and extended the support of their respective countries to the Tamil Diaspora. Although the US and Britain have not participated at the summit, they have agreed to support moves initiated by the Diaspora along with the countries that are supporting them. All the countries that have participated in the summit have emphasized the need to use only democratic tools to protest and to join forces with progressive forces in Sri Lankaâ€™s south. The Western nations have called on the Diaspora to work fast towards establishing a Sri Lankan identity. The countries have agreed to provide the funding necessary for infrastructure development after conducting a progress review. (LNW)]]>