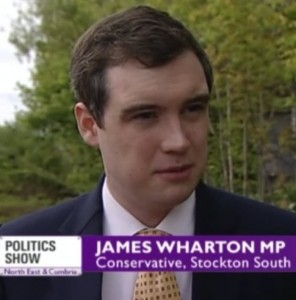 For a 28-year old backbench Tory MP it was a highlight of his young political career. James Wharton beamed for the camera as he accepted a ceremonial plate from the Sri Lanka Defence Secretary Gotabhaya Rajapaksa.

Sri Lanka: What they say

UN Secretary-Generalâ€™s Panel of Experts on Sri Lanka â€œThe Panelâ€™s determination of credible allegations reveals a very different version of the final stages of the war than that maintained to this day by the Government of Sri Lanka… The Panel found credible allegations, which if proven, indicate that a wide range of serious violations of international humanitarian law and international human rights law was committed by both the Government of Sri Lanka and the LTTE, some of which would amount to war crimes and crimes against humanity.â€ James Wharton MP in Parliament after trip to Sri Lanka â€œThe Sri Lankan Government launched a campaign to bring the civil war to an end â€“ an effective but ruthless military campaign of the sort necessary to put down an organisation such as the LTTE using military means. We have heard much discussion of some of the atrocities that are alleged to have been committed during that campaign, but in the context in which it happened we must all understand that the LTTE was one of the worst oppressors of the Tamil people during and before the conflict.â€ (The Independent)
]]>