Since 1993 , SL has been buying MI 17 Helicopters , and about 15 such helicopters have been sold to SL , the Co. says. SL has placed a fresh order for fourteen MI 171 helicopters which are the latest of the older version MI 17 . Towards this purchase , a loan has been taken from Russia to the tune of US $ 300 million which in SL rupee equivalent is Rs. 40500 million. Mind you this loan must be re paid within a relatively short period of time of 10 years. The relevant agreement was signed by the President when he toured Russia recently. 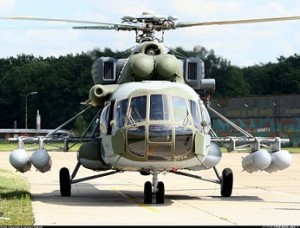 Even during the 30 year old war , only 15 MI 17 helicopters were bought . When an international journalist has questioned from Air Force spokesman Andrew Weerasuriya on why 14 helicopters are being imported when the war is over , he had replied , TheÂ  Sri Lankan Air Force has started a civil air service â€˜ Heli tours Co.â€™ for tourists , and it is for that , this import is being made

But the most vexatious issue besetting this import is, why these MI 171 helicopters are being purchased for tourism?

This MaRa regime which stubbornly refuses to grant the justifiable increases in salaries to the University Doctors ; the MaRa that treats the framers in a jara way without paying compensation to the farmers on account of their crop failure, suddenly arranging import of 14 MI 171 helicopters ostensibly for tourism is suggestive that this deal is tainted with corruption , conspiracy and clandestine aims not in the best interests of the country and the people . MaRa regime is notorious locally and internationally for its incapacity to do anything frankly and forthrightly. It is a mendacious and moribund regime
LeN