The World Tamil Protection Movement (WTPM) on Saturday announced that it would launch a protest on July 29 at 4.00 pm in Chennai supporting Tamil humanitarian and national activist Mr Gobi Sivanthan, who is continuing the hunger strike for the seventh consecutive day at the London Olympic village. 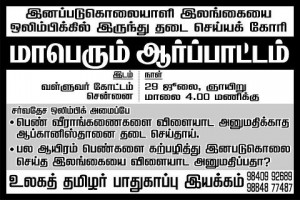 WTPM urged the Olympic committee to send back the Sri Lankan sports personnel, as Sri Lanka has been accused over human rights abuses after allegations of war crimes by Sri Lankan armed forces.